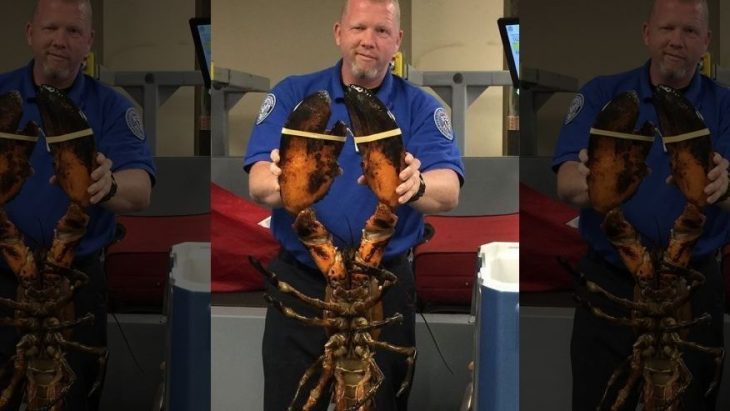 The owner of a Connecticut fish market says she was “personally offended” after she saw a photo of a 20-pound lobster being handled by a Transportation Security Administration screener on social media.

Lisa Feinman owns Atlantic Seafood Market in Old Saybrook, and says she packed the lobster in a cooler with other lobsters for a customer from Georgia. The container set off an alarm during screening at Boston’s Logan Airport prompting an inspection, according to the TSA. Spokesman Michael McCarthy later shared a photo of a screener holding the lobster, getting thousands of likes on Instagram.

In a Facebook post, Feinman says the TSA should “leave our personal property alone.” She also criticized the way the agent held the lobster, saying he could have snapped off a claw by putting all of its weight on its joints.

.@TSA officers are skilled at screening all sorts of items in checked baggage…including this 20+ pound lobster at @BostonLogan pic.twitter.com/euhyyO6F7V

The TSA told Fox News on Wednesday it was “reaching out to the passenger directly to discuss her concerns. During the busy summer travel season TSA officers will screen more than 2.3 million passengers per day. We share images through social media to provide helpful travel tips and to better inform the traveling public about TSA’s mission.  At no point does TSA reveal passenger specific information.”

The lobsters weren’t hurt during the screening, the TSA added.

“Its certainly the largest lobster I have ever seen, McCarthy told the Boston Globe. “And Id be surprised if weve ever screened a larger lobster.”

According to the TSA’s website, lobsters are allowed to travel in checked baggage provided that they are “transported in a clear, plastic, spill proof container.”

“A TSA officer will visually inspect your lobster at the checkpoint,” the site promises.

McCarthy told the Globe the lobster was in a cooler and “cooperated quite nicely with the screening process.”