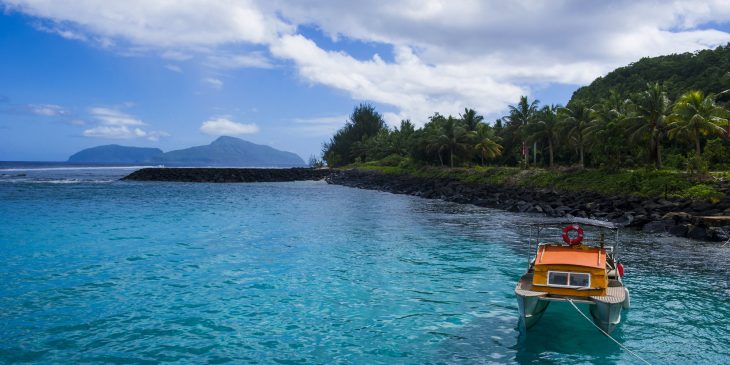 Tesla completed its acquisition of SolarCity on Monday. To mark the occasion, the company announced Tuesday that Ta’u, an island in American Samoa, now gets nearly all of its electricity from its solar panels and batteries.

The 17-square-mile volcanic island’s roughly 600 residents previously burned diesel to power the generators that provide electricity to its smattering of villages and a private airport. Now a newly completed 1.4 megawatt solar farm is set to come online and supply nearly 100 percent of Ta’u’s electricity. It’s backed up by 6 megawatt hours of storage from 60 Tesla Powerpack battery systems.

“Ta’u is not a postcard from the future, it’s a snapshot of what is possible right now,” the company said in a blog post. “Renewable power is an economical, practical solution for a growing number of locations and energy needs, and islands that have traditionally relied on fossil fuels can easily transition to microgrids powered by solar and storage today.”

The company posted a slick video on YouTube detailing the benefits of the project:

The U.S. Environmental Protection Agency and Department of Interior funded the project, along with local development officials. The system is expected to offset 109,500 gallons of diesel per year, according to SolarCity.

The move comes days after shareholders gave Elon Musk the go-ahead to merge his two companies. He’s the largest shareholder in both firms and serves as chief executive of Tesla and chairman of SolarCity. The $2.23 billion deal is meant to marry Tesla’s battery technology with SolarCity’s photovoltaic panels and roof singles, creating, in theory, a one-stop shop for zero-emissions cars and home energy systems.

“This is part of making history. This project will help lessen the carbon footprint of the world,”said Keith Ahsoon, a resident whose family owns one of the food stores on Ta’u, in the blog post on SolarCity’s website. “Living on an island, you experience global warming firsthand. Beach erosions and other noticeable changes are a part of life here. It’s a serious problem, and this project will hopefully set a good example for everyone else to follow.”