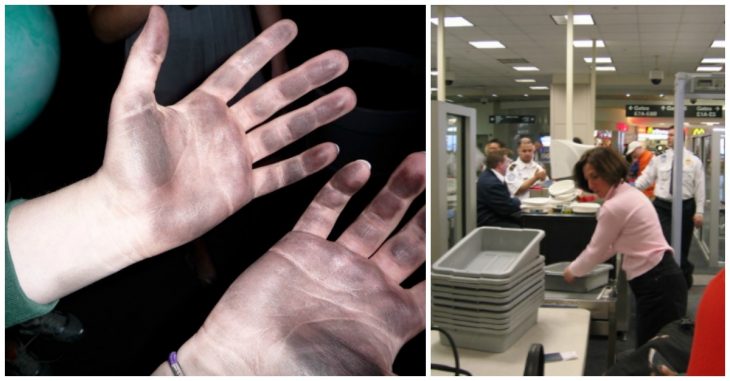 So we allhave a general idea of what to do when we’reheading toward airport security, but do you ever get there and still find yourself dumbfounded by how to get through quickly and painlessly?

I certainly do though these hacks to get through airport security faster definitely help.

Every experience at the airportseems to be a bit different than the time before: one go-aroundhas you taking out every single electronic youve got in your bag; the nextdoesnt requireyou to take off as many layers as you thought (as youre stripping down).

But no matter what, knowing what not to do at airport security in any given situation will help outtremendously.

From avoiding the wrong shoes to making sure your tone (and words) are in check, weve got a list of no-nos to watch out forin order tomake your experience run as smoothly as possible.

Did weforget any major “don’ts”that would make airport security less stressful? Let us know in the comments below, and

1. Be Rude To The Security Agents

The safety and well-being of everyoneat the airport rests on the security workers’ very shoulders. This should be an obvious one, but don’t be disrespectful to them while they’re on the job, even if you feel they were “rude” to you.

If anything, it’stheir dutyto protect you, so be happy that they take their job seriously.

This is where things can get a bit… gross. Yes, wearing sandals may seem like a good idea because you can easily kick them off and put them back on. However, it’s not worth the grime that your feet will encounteryou donot want to be barefoot in an airport, even for a minute.

3. Get To The Front Of The Line Totally Unprepared

If you chit-chat, go on your phone, or just zone out while you’re waiting in thesecurity line, you and everyone behind you could be in for a delayed and unpleasant surprise.

Airports and airlines are different when it comes to their policies at security, so don’t assume you know exactly what to pullout of your bagin advance. Instead, just pay attention.

4. Touch The Bins Without Sanitizer

You know the bins that everyone grabs once they get to the front? Well, it’s a given that you’re going to have to do the same thing, sodon’t come unprepared without hand sanitizer (in an acceptable travel size, of course). Also, don’t count on the airport definitely having hand-sanitizing stations at the security exit.

5. Wear Layers And Layers Of Clothes

Although many people do this in order to bring as much on their trip as possible without having to check in too much luggage, wear layers with moderation.

Realistically, you probably won’t be peeling off your clothes until you’re fairly close to the front of the line, so don’t make life harder on yourself and others by needing to take off nine layers.

6. Stow Your Identification And Boarding Pass Away

Once you check in and are on your way to the security checkpoint, do not put any of your documentation away you’re going to need it in no time.

And who wants to be the one to make the line last longer? I know I sure don’t.

7. Ask “Why” Every Three Seconds

You know that travelerbehind you who keeps asking “Why is this line so long?” or “Why do we have to take this out of our bag?” Yeah, don’t be that person.

Everyone has to deal with the same protocol at the airport, so there’s really no point in feeling you’re privileged enough tocomplain about it constantly.

So this should be a given, but do not show up at the airport intoxicated. You will make security go much slower for yourself and everyone around you. Getting taken out of line doesn’t sound like a fun time to me.

If you’ve heard a story about someone getting through security with more than 3.4 ounces of liquid, you know what to expect. Better to be safe than sorry, so don’t take the risk.

If they flag your carry-on, they’ll have to pull you to the side and go through your whole bag until they find the item. That’s probablynot what you need as you’re hurrying to catch a flight.

10. Take Out Every Single Electronic You Have

Don’t think that you need to take out every single electronic in your bag: it’s really just the large computers and gaming systems, according to The Independent Traveler.

Remember this tip, because once you take things out of your carry-on, itmight not be easy putting themback the way you had them.

11. Think That Youre Not Going Through Additional Security

Don’t assume that you won’t get flagged for additional pat-downs and such.

Also, if it happens, don’t take it personally: They’re singling you out, they’re just taking their job seriously and doing random searches when needed.

12. Come Without Prescription Cards Or Labels For Medications

Make sure that you clearly label any medications in solid or pill form, and openly communicate that you have these on you at the security checkpoint, according to TSA.

You are solely responsible for the way you present your medications, and it’s better to be over communicative than under.

Although the immediate line you file into is a one-way, once you get close enough, it’s your time to strategize.

Most people headto the line that isconveniently in front of them. Although you might have to say “excuse me” once or twice, look at the opportunities for shorter linesa little further away, and you’ll most likely get through security much faster.

Did we miss any extremely important things to avoidwhen it comes to going through airport security? Let us know in the comments below, and